Open exchange on culture and heritage

So far multiple generations of students have traveled Europe supported by Erasmus-funding. But diving deeply into an unknown foreign culture might be challenging at times. Thereby, the phenomenon of the ‘Erasmus-bubble’ emerged, often keeping students tied to their fellow exchange peers instead of engaging in their host community. German cultural management student Lara Knigge reports how her engagement with the Association of Cultural Heritage Education in Finland within a new module of her home university helped her escape that bubble for a while during her stay abroad from September to December 2019.

Going abroad, I wanted to experience a country apart from the mainstream of choices, but within Europe since it offers diversity at the doorstep. Finland turned out to be the perfect choice for me. Always having had a fascination for the North of Europe, paired with a promising cultural management program taught in English with additionally a very different national language to discover – apart from the country’s natural beauty – finally lead me to Turku in the Southwest of Finland.

While preparing for going abroad, I was of course confronted with some stereotypes about the country and its people. Most heard: cold, dark and rather distant. But I refused to see this as the final impression I would leave with though multiple people tried to “prepare” me for exactly this by going up north for the transition of autumn to winter. I wanted to prove them wrong by experiencing as many facets of Finland as possible, gaining a glance past this imagery.

I knew my study program of cultural management would allow me to get a theoretical overview in the field and go on multiple excursions regarding culture in Turku during my semester there. But I was going abroad with the Erasmus+ program – so would I not in the end see it from the so-called Erasmus-bubble? Would I maybe miss out on certain experiences?

In this regard I was very grateful for a newly founded opportunity my university offered for going abroad: Doing an International Community Project (INTER) in the local community based on the method of service learning. Service learning is a pedagogical concept combining academics with reflection in learning while gaining practical experience in doing something for the common good. I felt this approach complemented my personal development while staying abroad perfectly and could not have wished for a better partner to make this experience with.

I discovered many different aspects of the structure of cultural work and culture itself in Finland and had the opportunity to compare with how other countries managed both individually and in collaboration. Thereby it was very interesting to see on what levels ideas were developed and where decisions were made. This was very insightful regarding the fact that at times rather opposing facts were presented side by side – often unnoticed as it seemed to me.

Whilst participating in a conference on living heritage in the northern countries, I personally first encountered the whole issue of safeguarding at a degree at which I felt I could grasp part of the challenges involved. In my opinion, safeguarding is more known in regard to something ancient, something unchangeable lying in the past with the final product presented for example in a museum.  That the practice of active safeguarding is vital to determine the later narrative, especially regarding truthfulness, was something that just did not come to mind as easily. I feel this is rather characteristic for our society at whole: Preserving something past is of great importance but preserving something while it is still present misses to reach the same.

Further, I felt challenged by the fact that so many different actors from different backgrounds and levels came together, often even from the lower ones and smaller institutions, yet in financing and further guiding structure often bigger institutions or the state are in charge and give direction from above. One thing discussed in this regard during the conference was also the need for further guidance and explanation to make communication sustainable both ways. I feel this is always a difficult topic to discuss, since giving over-arching regulations is supposed to meet individual needs.

That national borders and levels are an issue was especially applicable to me in a panel discussion, in which all nations participating in the conference were represented, but the indigenous people identifying with the Sámi culture had no place since they did not identify within only one country’s borders. This is a very sensitive issue in regard to the true representation of diversity and there is definitely more work to be done.

Nonetheless, the overall idea of the conference and its input was a good step in the right direction regarding communication and collaboration across levels and borders. Especially with culture I feel it is so essential to communicate that it cannot be forced into fixed structures but has to be thought about in a flexible manner, over and over again. A nice situation depicting this, occurred at the dinner table one evening during the conference: a woman from Norway and a man from Sweden were able to talk to each other in their respective mother tongue, except one of them used older words and they understood each other quite fluently. I was amazed by this being possible with all the development language goes through over time.

Following the conference, one day was reserved for a world café on a new tool developed called ‘wheel chart of sustainability’. It is supposed to assist in reflecting on living and thereby mainly intangible cultural heritage in different categories such as ownership, role of economics or ecology apart from others. Each category offers a set of guiding questions ready to discuss after having chosen a living heritage phenomenon one is interested in. We tested the tool twice in two different pairs and I really had wonderful conversations fostered by it. Both times I happened to partner with Finns, giving me further insight into my host community’s such as individual traditions in exchange with my experience as a German and a younger person. My first discussion was on Finnish summer houses and their importance, even sort of sacredness to their owners and how the tradition is influenced by tourism. Then we talked about the bread baking tradition in Germany, which was also exciting, since Finland has such a tradition itself. The second round was on the more personal tradition of singing lullabies as a bedtime story and handing this on from generation to generation and especially what happens, if there are no children to hand it on to. My contribution then was in fact on a more virtual topic: digital texting. Both these themes were very insightful in the discussion and I thought about them how I would have surely not without this exercise.

In general, I enjoyed the open exchange platform I was offered at the Association of Cultural Heritage Education in Finland and every insight I gained. These insights were connected to official occasions and projects such as the conference mentioned and the projects, I participated in, doing research on Finnish-German-similarities but were also in the small encounters on a daily basis. For example, some karjalanpiirakka and korvapuusti welcomed me the first time I came to the office in Helsinki; we went for lunch to a German place around the corner, the owner was originally from a small town located next to the one I study in back in Germany and I discovered the importance of Finnish lounas while eating there. I drank Glögi and I said good-bye just before Christmas by baking traditional German Christmas cookies. As the days grew darker, we talked about appreciating the light so much and I discovered, being it Christmas lights on the streets or a daylight lamp in the office, Finns knew how to make the most of the darkness. Christmas time in general was wonderful in this regard, also learning that in fact it is the most important festivity of the year. I further heard of May day, Independence Day, school dances and the traditional Kantele, I even got to listen to it once.

I found it so interesting to see the Association being engaged from local to national and international level in different projects and cooperation. How struggles seem to be the same at core everywhere, but the structures approaching them so different. How the history of different countries is connected, Sweden, Russia, Finland and even Germany for example and how history determines in parts how much power the state has in culture in particular.

Without this project work I feel I would have had a much less deep exchange with Finnish ways of life and overall culture than I did now. From professional to private I could ask about traditions of doing things and received answers on the spot and could discuss further. Each of my tasks provided me with different insights and even changed my perspective in valuing some points. I am very grateful for this experience and hope many more generations to come will be able to benefit of an experience like this, when going abroad. 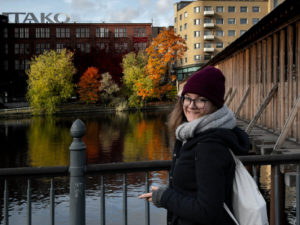